I knew something like Lake Jipe existed. Its one of those things you know but you don’t know how you got to know of them. Or even where it was. Lake Chala I don’t remember having heard of it.

But sometime last year I saw Safirinasi, a travel agency I trust and love, had taken people to a trip to Tsavo West, Lake Jipe and Lake Chala. It seemed like a very unconventional trip. I had never heard of such a combination, let alone people being taken to see some not so common lakes. And being the ardent traveller I am, that trip definitely made it to my 2019 bucket list..and when the opportunity arose, I grabbed it. Some things are so rare that there is no time to think twice of experiencing them.

Having talked of Tsavo West, through the Mtito Andei gate in my previous post, I’ll delve right into Lake Jipe and Lake Chala. The reason why gates are important when talking of Tsavo, is because Tsavo National Park, East and West, is larger than some countries such as Israel and Rwanda. Yap! And it has tens of entrances depending on which side you are coming from. Obviously for something larger than some countries, two people in different sides of the park, might have two totally different experiences, and even their pictures might depict very different sceneries. And of course, unless one plans to spend several days exploring Tsavo, its impossible to see the whole of it on the ground with a day or two.

So on Saturday we woke up early so as to try and get to Lake Jipe early. We had camped in Tsavo West using the Mtito Andei route, and where we wanted to go was Taveta, on the other side of the country. So we got out of the park first, drove to Voi town, and took that route that leads to Holili, or Tanzania if you like.

Turns out that this was to be a long ride, seeing that Lake Jipe is halfway in Kenya, halfway in Tanzania. Something that puzzled most of us. None of us could get how they know where exactly the boundary is in the middle of the lake.

Anyway, to get to Lake Jipe, managed by KWS on the Kenyan side, we had to get to Tsavo West again, using the Maktau gate. I could see the shock on people’s faces, as they tried to comprehend how one can drive for over five hours, and still be in not just the same park, but the same side of the park, West. 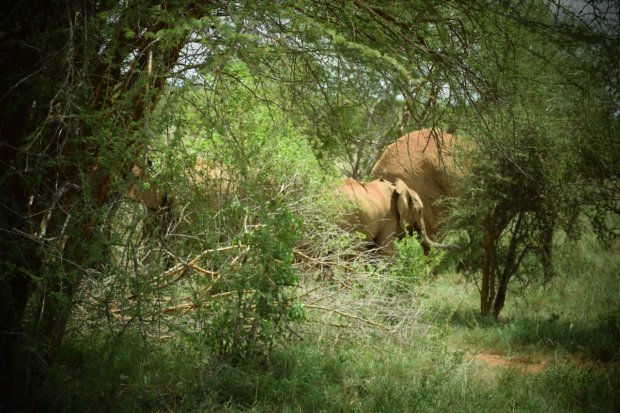 And for me, experiencing Tsavo West from the Maktau side, felt like being in a new park entirely. For one, its green. Like thoroughly green. The semi arid kind of green. It looked so damn undisturbed. Like animals here are left alone most of the time. Even by predators. Everywhere we looked were this not so tall trees, covered with a green canopy and really short grass covering the earth. I had never seen such expansive savanna woodland and grassland.

And the highlight of that drive was seeing two cheetahs. lounging somewhere beneath a tree. One sleeping down, and another looking at us. We had almost missed them, because of how much they had camouflaged with the bark of the tree they were under. They looked like big peaceful cats. And didn’t have as many spots as one would expect.

So barely after sighting those cheetahs did Lake Jipe come to view. Lake Jipe is formed at the bottom of the mountains/hills on Tanzania’s side. On the Kenyan side its arid and semi arid, and flat all the way to the lake. While Tanzania’s side is full of hills, complete with human settlement. 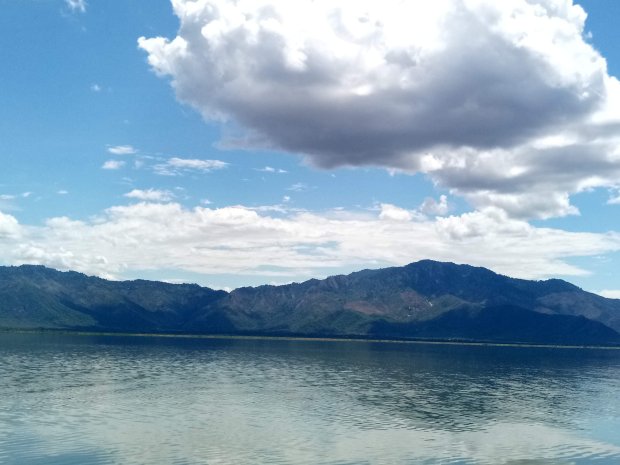 The lake itself isn’t so huge, I think people usually cross in an hour or so. And has some hippos and crocodiles. Especially on the Kenyan side where, due to it being a protected area, people rarely fish or overuse the water for their own purposes. And due to this, we were told that the fish and other animals in the lake, adjusted and started using the Kenyan side of the lake as breeding ground, since they won’t be disturbed or harvested unlike on Tanzania’s side.

We went for a boat ride, albeit a short one, and our boat guide was explaining to us, that the communities around don’t care much for borders or who is in which country, because ni Shemeji zao. That means they have intermarried, and as such, quarreling would be like quarreling with your in-laws. Especially Kenyan men who’ve gotten wives from there. So as far as they are concerned, they live peacefully with each other and sometimes even vote on both sides. As for him, a Taveta man, he voted for Magufuli.

It was interesting seeing a turtle swim. As usual, we were perplexed as to how it got here considering we all assumed they are only found in the ocean, not in a lake. The lake’s color is green and there are a lot of reeds on the Kenyan side, that we noticed people on the Kenyan side use to thatch their houses.

Speaking of people, when we were coming to lake Jipe, we were inside a park. But we used a different route to get out. And now we could see villages or at least houses of people along the way. Their houses were mostly made of mud, and thatched with dried reeds. As expected of Kenyans, we saw a motorbike or two parked outside. And then hundreds of goats and sheeps. I don’t remember seeing any farms on this specific side. Seems like pastoralism does well here.

My busmates were commenting on how some houses looked they were about to cave in, but had a solar system on the roof. Making us wonder that probably that was the work of some NGOs. But unlike when I was young, when I used to naturally assume that living in mud houses meant one was automatically poor, this time I refrained from making such judgments.

I once heard a story of how some Europeans, back in the day before they occupied America, went for trip to those unknown lands. When they landed on the shore, they got to interact a bit with the people they found inland, and concluded that native Americans must be very poor and are starving, seeing that they were eating insects, especially the kids who would ran after small insects, cut off the legs and wings and eat the insects happily. Those Europeans wrote their observations about this poor starving people in their notebooks and went back home to report the same.

So the next expedition to the same place, got a ship fully loaded with food, to go feed those hungry native Americans. However the people on this second ride,weren’t told how the others concluded that those people needed relief food. So they were shocked, to get there and find obese kids and men, walking around with their bodies not only well fed but also fat. Turns out, that eating of insects isn’t due to poverty, but a choice of delicacy.

So anyway, I’m not saying my fellow travelers were not justified to classify this place as underdeveloped, but the kids and adults seemed well fed. Especially the kids.

So we left Lake Jipe and its people to go camp elsewhere, closer to our next destination, Lake Chala.