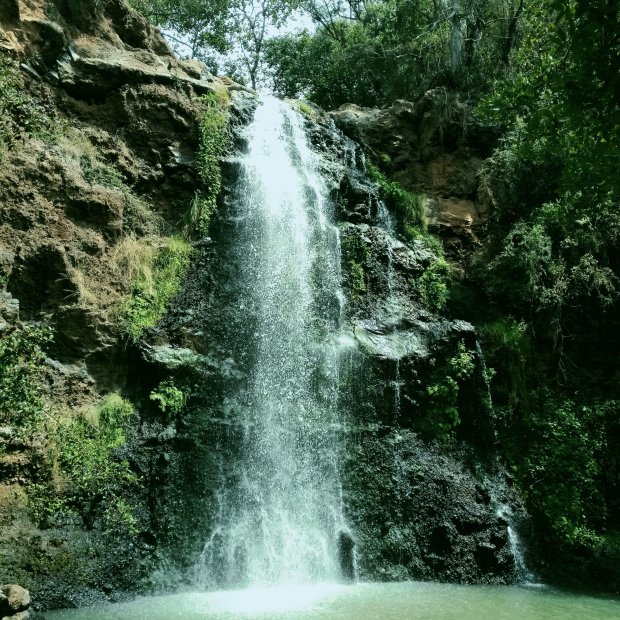 I first saw a picture of this place from a travel agency i’ve used severally. In a swim suit, flipping her hair full of water in front of a water fall. Blue pristine waters. At that moment I knew I would go there one day. I just didn’t know when.

So when I saw an opportunity last week, I booked a slot instantly. One because it was a day trip and two, because it was affordable compared to other packages I had seen of the same.

Ngare Ndare is found several kilometres after Nanyuki town. I wanted to say its in Laikipia county, but i’m not so sure whether its in Meru or Laikipia.

Anyway, away from that, I saw a discussion somewhere that changed how I viewed art. And it was about art in its various forms and how people use art. To share something, to give a certain perspective, to entertain, to inform, to ridicule, to get things off their chest, to hand make something that has never existed before..in simple terms all artist agree they bring something to the world.

But what someone else said in regards to that caught me unawares.

That maybe its not us using art, but art using us.

Like an artist paints on a canvas assuming its him or her using that kind of expression to bring forth something. Over and over again. Something new each time.

But maybe its the art using the artist as a canvas. That all those times a poet writes a poem, its through that artistic expression that their soul grows.

I think I’m struggling to explain what I understood from that. But it did correlate with another thinking I had encountered elsewhere. That the things we go through in life, bring forth the outmost best selves our souls wanted to grow to be when they entered earth. Which is why you find experiences don’t leave us the same way they found us. They change something in us as we go through them. They use us as the canvas.

And that’s what I felt like as I traveled yesterday. Like traveling was just not that thing I do to have fun but was getting a totally different meaning as life progressed. It was that thing that was changing me.

I didn’t want to go alone to Ngare Ndare. But all my attempts to bring someone along failed. So in the end I went ‘alone’. Along with 60 or so souls. Two buses.

I love traveling alone. As anyone who knows me knows. But I’ve also tremendously enjoyed traveling with my close friends.

But I wasn’t so sure about yesterday. I guess my emotions were all over.

Yet seated alone in my corner, I can say this was the most fun I’ve ever had with total strangers. On one side, I recently accepted that my social skills aren’t anything to write home about. And being aware of that has actually boosted my confidence with people. Sounds ironical?

Like before, for example when I went to Kereita Forest with another bus of strangers, I enjoyed zip lining. But I really didn’t enjoy the whole social experience. I didn’t even make a single friend with all that nervousness of strangers.

But presently, me accepting that my personality type, has a lot of strengths, but our weakest link is social skills and emotional situations, has had me get this peace over it all. Like yes, we are not good at this, but we’ll figure it out along the way.

I don’t remember being as carefree around people I don’t know as I was yesterday. Its like this knowledge that I’m not good at peopling made me now care less about a lot of stuff I used to worry about when around strangers. And isn’t it weird how things fall into place once we stop worrying about them?

Anyway, my most memorable experience was swimming in the falls in Ngare Ndare. I only actually swam twice across the pool. But the swimming or lack of it isn’t what I remember most. But this..

That water was the coldest water my skin has ever come into contact with. Coldest. And I schooled in one of the coldest places in Kenya for my primary school education, yet the water in Kinangop wasn’t as cold as that pool’s water.

It was so damn cold that none of us was shivering. I think our bodies just got confused on how to react to that water. So damn cold that my body I think was frozen trying to understand the action to initiate in its various organs. It reached a point, I stopped feeling the water itself. Like my skin became numb.

After swimming we went for the canopy walk. Which is fun. I did a canopy walk in Rwanda last year so I think I got over the novelty of it all. So this time I was trying to spot an elephant or something. We did see some baboons but no elephants.

And as we walked and walked and walked, at some point I wanted to lie down there and just be. I guess I really should visit Bali soon. Where there are hammocks hanging on their tropical trees many meters off the ground. And there are even swings up there.

And that’s the thing about this trip. It seemed like the precursor of things to come for me travel wise. In all aspects. My dream travel destination this year has a lot to do with a fall and swimming. And a lot of swinging in the air for 3 or 4 different destinations that I have in mind. And this trip had all of them in a small scale. I don’t believe in coincidence much.

Anyway, all I’m trying to say is that, my view of the places I’m going to and the books I’m reading this year, has changed from how I found those places to be like or how I found the book, to how that place found me has and how it has changed to me, to how much growth and change that book has had in me.

Its a new territory of being or becoming. Like we are up another level. But its an awesome territory nevertheless.