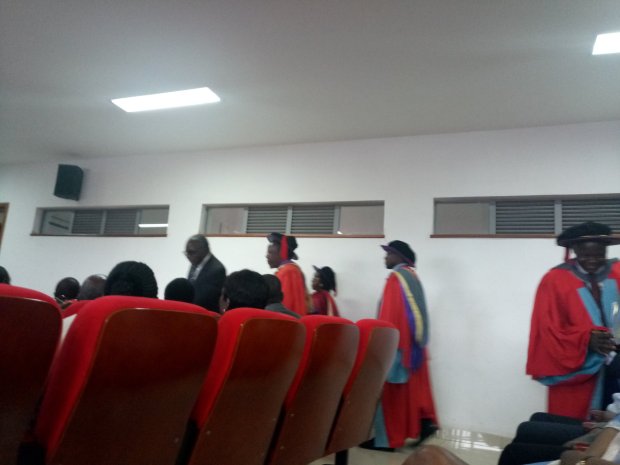 Today I sat with fellows whose sandals i’m unfit to untie.

They walked with their heads held high. They laughed with loud abrasive laughters. They took jibes at each other with careless abandon. They are who they are. They are where they are. And no one can ever question the facts of their lives. They have lived a life that allows them to be as controversial as they want. Their sarcasm dripped in every sentence. Careless abandon earned from years of hard work. Power gained solely through their knowledge.

And this same day, I can confidently say I was the youngest in that room. By age. To the extent that someone referred to us seated at the back as the grandchildren of the retiring Professor whose party we were attending.

Today I felt right at home.

Among scholars who have seen far and wide. Among men and women who eat books for a living. Among fellows who are so educated that they did their PHDs 30years ago, yet their work is being used for a 2018 world conference.

Today I saw greatness. My kind of greatness. It awed me so much that I was dumbstruck. With a permanent smile on my face. I couldn’t believe a world I would fit right in existed in my circle. Greatness so big that it allows everyone to shine at the same time.

Today I went for a cocktail party thereafter. Where the discussions were purely academic. People sharing their thesis and dissertations. And professors their next publication. Everyone making new contacts or networks. And not for deals or biasharas as is Kenyan to do. For academic purposes. For collaborations in organizing conferences and which concept papers to work on together.

Today I heard scholars mention their 2019 goals. And none of them had anything to do with money or a self-improvement plan. It was all for the good of humanity.

And today, I felt guilty admitting that over half, maybe even 80% of the professors in that room are from Nyanza. They are luo. And whether this is tribalism or not, it was just a fact. Those people read. And by 1960s, some were doing their masters. And in 2018, the trend continues. Whereas in my constituency, the only professor we have is an MP who uses the term professor as a title like any other, not because he is a scholar.

And as my heart and mind felt right at home, I wondered where the youth are. It sounds so cliche, until you enter a room full of highly educated people, and besides the niece of the graduating professor, and maybe me and other 1 or 2 people, everyone is over 40, with a few 30year olds. In simple terms..out of over a 100 current scholars, less than 10 were below 40yrs.

Young people are studying for masters and PhDs. Only problem is most of them are doing courses for money or job purposes. Something beneficial to you personally.

But for our society to move on, we need people who not only care for themselves, but also the society at large.

As we celebrated and honoured the father of Environmental Law in Africa, everyone had words to say about him. And not necessarily good words. The man has never entertained fools.

He studied abroad and was called to teach in Canada, England among others. He refused and came back to beg for a job in Kenya. Despite US offering him a job too.

And through and through the man with his colleagues, have fought for environmental courses in Kenya. He founded the Center for Advanced Studies in Environmental Law and Policy. First of its kind in Africa. A dream he wanted to operationalize in 7 African countries. A dream he started talking of a decade before it ever saw the first light.

Nothing absolutely wrong with that.

Except that society isn’t built by individual goals. Its built by that 1 visionary man who won’t give up his vision of a better society.

I don’t believe in bashing one group to uplift another. So don’t feel bad if all your aspirations are purely personal.

But this is dedicated to that person, maybe jobless or in a lowly paying job, or just hustling to get by in life, but with a vision to make a change in society.

This is to that person, who has come to Nairobi and has been faced with a fast paced life, that they forgot, that when they were getting away from the village, some issues such as teenage pregnancies really wretched their hearts and they would really love to do something about it.

This is to those who don’t fit in a society that measures success with money. That glorifies the rich. And forgets those who make meaningful contributions to society. That glorifies thieves and names every hospital, school and institution after them, yet Wangari Maathai and Conjestina are lucky to have some road in the outskirts of the city named after them.

This is to the one who wants to genuinely make society a better place. But doesn’t see how.

May you know, that one day when you are retiring, and speaker after speaker speak of your dedication in your chosen field, and how you helped them, it shall be totally worth it.

That when you forfeit wealth for fulfillment, having the multitude of people you mentored write and publish a freaking book in your honour, it shall be among the greatest honour a man can get in the land of the living.

And whatever you are passionate about, may you do it so damn well, that others after you shall have no choice but to copy paste your work, because yours was pure excellence.

And wherever you are, you are not alone,we are here. Drops in the ocean. Far away from each other. But we are here. And despite the many crocodiles on our journey to Canaan, we shall make it.

May your being young never discourage you from pursuing matters of the aged.

Today I sat in a room with fellows whose sandals i’m unfit to untie.

And looking around the room , I knew if not me, no one else would take the baton. So I smiled, I laughed, I trembled, I took unclear pictures knowing that one day, it shall be my turn, for now, I hope the baton doesn’t fall from their hands. I hope they run their race long enough to hand it over to me.

Today, my hope in my dreams were renewed.

Today I was re-energised