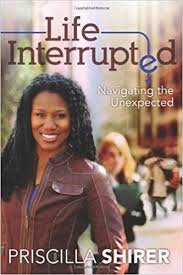 Life interrupted by Priscilla Shirer is a book based on Jonah’s life/book.

We’ve all heard of Jonah and his adventures with the big fish that swallowed him. Its what we know of the guy.

But in my wildest dreams I wouldn’t have thought of his life journey the way the author has been revealed to. It ceases from being some prophet-who-was-swallowed-by-a-fish-for-3-days to my story. It has opened me up and dissected my point of view eternally.

The biggest lesson I learnt from it was this; what I consider Life Interruptions are actually  God’s Interventions. You know the way we were living life, having good days and bad days but with a routine of some sorts and a rhythm, then something happens and we start asking, Why and For how long? And for the life of us we just can’t fathom why God would allow us to go through what we are going through. It seems not only painful and hard, but also very unnecessary. Like really God?

And through Jonah’s life we see that God has divinely interrupted our lives for His own reasons. And if His word is anything to go by, then its for our own good. God loves us too much to leave us ‘like that’. Like that meaning- with our current mindsets, way of life and maturity. He desires us to mature in Him, and sometimes, that won’t happen if the status quo in our lives remain. Sometimes that change can only occur when our lives are disrupted.

There are desert lessons we can’t be equipped with while swimming in the ocean. Survival lessons that can only be taught practically. There are aspects of God that we can only experience and prove to be true while down in pits we are not sure we’ll make out of.

Which helped me internalize James chapter 1. Count it all joy when you encounter trials of various kinds.. I used to think that verse meant, me going through a hard patch while still having joy in my heart. Like the way patients in hospitals smile or laugh.

But now I realise its deeper than that.  The moment you understand that trials aren’t God’s ways of punishing you but God’s refinery of molding you, then at the onset of every trial, you will count it all joy for you know that here God comes to make you a better person.

You remember the way we used to be excited to move from one class to another? The first few weeks of first term were joyful to say the least. But after a while we got used to it. The excitement wore off. And life interruptions/divine interventions are like being moved to the next class in the middle of second term. Just because you didn’t anticipate it shouldn’t dim the joy of moving up. After all, it means your teacher(God) has deemed you learnt enough in your current class to be ripe for the next category.

I could go on and on about this considering how I whine when I feel as if my life isn’t going the way I thought it should. But slowly God is changing my perception.

And speaking of perceptions, the author drove her point home concerning Obedience . When Jonah was called to go to Nineveh, he went the opposite direction. Its what he felt like doing. Little did he know that the part God was calling him to play, was a small role in a really big picture. But still, it was an important piece of the puzzle. But did he know that at the time?

Nope. And that’s us most of the time. God calls us to do something. And out valid reasons( Jonah had really valid reasons to not go to Nineveh -read the book to find out more) , we chose not to do what we’ve been called to do. Little do we know, like Ruth, that maybe that small step on our part will give rise to the lineage of the messiah.

So what do we do? Do we ask God to show us how important what He’s told us to do is? Like He should rate it on a scale of 1-10? His ways are way above ours. So maybe that smile your spirit nudges you to share might just save a life somewhere. So instead, we should ask God to give us a spirit that yields to him. Because only Obedience is required.

We don’t know why God has allowed some situations in our lives, but God knows. We don’t know the path our lives will take after this disrupted turn, but God does. We don’t know what God will ask of us tomorrow. We simply don’t know. But we serve an all knowing God. God knows. So as hard as it is, as risky as it does( imagine putting all your eggs in one basket?) , we have to once and for all decide whether we are in or out.

Because God didn’t want Jonah writing a letter to the Ninevites. He didn’t want him to send one of his buddies who had better oratory skills or had been to Nineveh before. God requires of us to do what He has directed us to do, how He has directed us, when and where. Unlike in this world where the end justifies the means , here the process matters. Its in that process that we encounter God in ways we would never have if we had found shortcuts to our assignments.

And God is God of second chances. He gave Jonah one. So we don’t despair when we realise that we were running away from God or we disobeyed Him. We ask Him to find us where we are. After all, He can take us back home. Just hope He won’t use the same mode of transport as of Jonah(hehe).

Overally, Life Interrupted hasn’t been a good book or a nice book. It has been a transforming one. It has rebuked me and corrected me. I can’t count the number of times I’ve stopped in the middle of a page to pray. Its been an intense internal journey.

I’ve read books that inform me, others dispel myths I had, others make some topics I never understood as clear as the daylight ( like In Christ in School of Prayer by Andrew Murray). But this one went and looked into my heart and made me face some not-so-beatiful mindsets and aspects of my heart I never realized I carried around.

I would recommend you read it when you are in that space of asking God why. It might work better then.