Dreams,goals and hopes. That was how my third year started. On a very high note. I wanted to open my NGO in the near future. I planned on traveling more. I wanted to be financially independent. We had plans with my then boyfriend. And all those things required some amount of money. My pocket money obviously would not be able to finance any of my goals and dreams. And that is how I started hustling(stories for another day though).
However,what that meant was that I ended up not spending a lot of time with my class buddies. The goodness is that my roommate and I share the same school course and classmates and inner circle. So she always kept me updated.Not so sure how I would have survived without that precious woman. And that is how I came to know of a trip they had planned for us eight friends.
The plan was we hike Mt.Longonot. Our itinerary was, we leave for Naivasha on Saturday, find a place to sleep and take supper, wake up early on Sunday, hike the famous mountain, go for swimming if possible (this is how ignorant we were on the energy required for Mt.Longonot), then sleep back to school on Monday. Everyone was to pay KSH 2500. That was the full plan. Now this is how it went down.
We met along the various points of Thika road on that Saturday and managed to get to the city and board a matatu to Naivasha quite easily. On arrival,one of us had a relative who lives on the outskirts of Naivasha who agreed to host us(we were so lucky on that). That meant more money to spend on other things. We thus shopped for foodstuffs and all requirements for the weekend. Cooking as a group was fun as our group is made up of different characters.

Saturday. The day that added a new love into my life. We woke up on time and called a driver whose contact we had taken,to take us to Mt.Longonot. There was a minor setback as he took us to the wrong gate(not the one people start hiking from). But he came back for us again and took us to the right gate. Lesson that next time we should google some of these details. 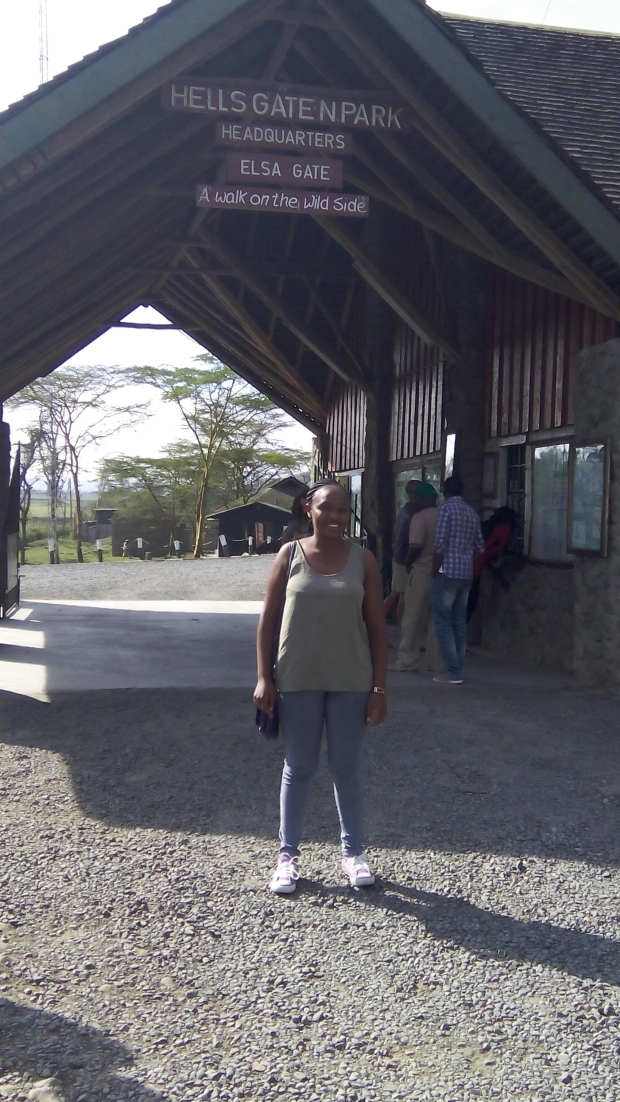 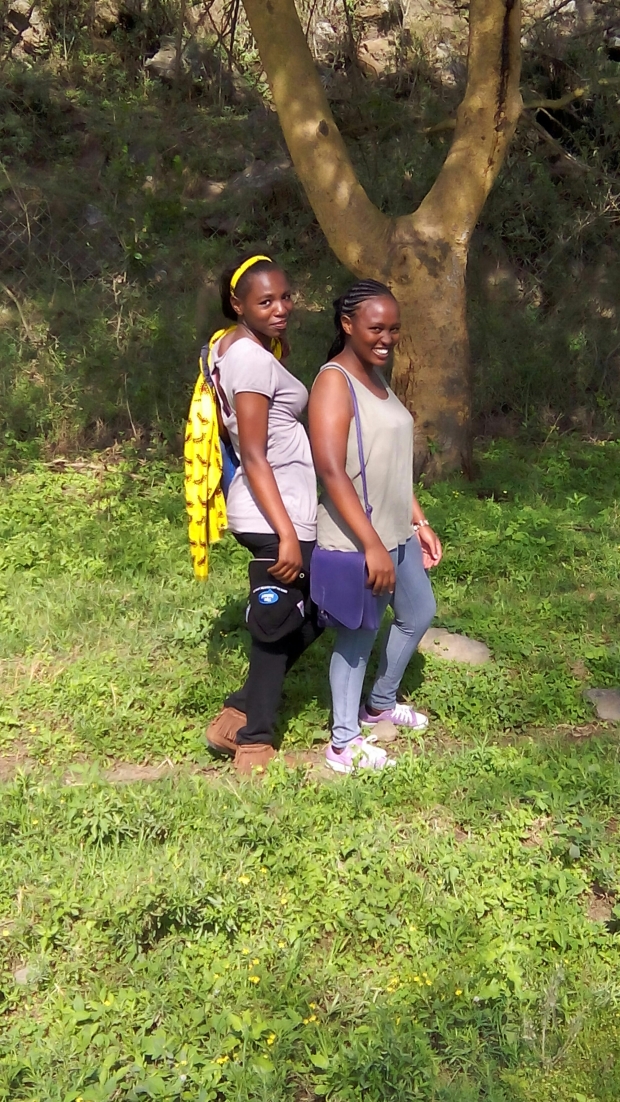 But that did not dampen our moods. Mt.Longont starts on a slow note. Nothing challenging in the first few minutes. After a while we were at Buffalo point. Now the views there are breathtaking. And to think that that was just the start of it all. This increased my excitement for those who know me,know how much I love good sceneries. Two of our friends felt our pace was too slow and thus they went ahead. I should mention that I was the most unfit and slowest in the group. Luckily, one of the two men in our group,who was the team leader of sorts, decided he was not leaving anyone behind. Rather,he was not leaving tortoises like me to lose hope. Mt. Longonot at this point had started revealing its ugly colors. But we arrived at the first resting point well and even decided to move on so that we can reach the summit on time. 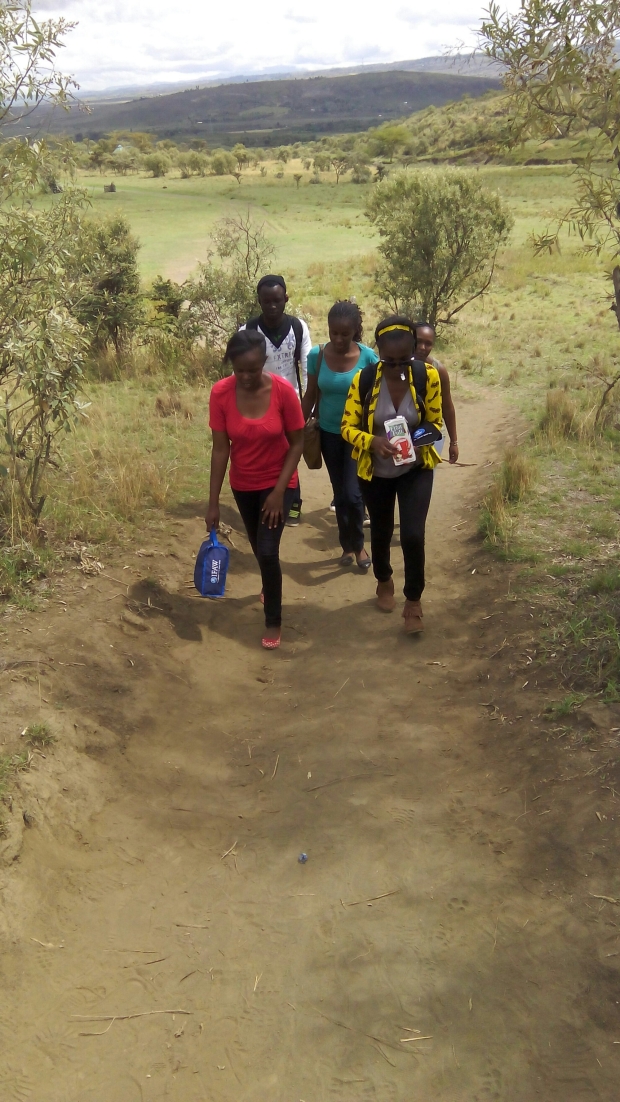 To say that climbing that last part was tedious would be an understatement. I walked upright, I bent, I crawled, I walked backwards all in a bid to just move one step forward. Was my body a machine, it would be producing all those squeaking sounds at this point. Alex,the team leader kept on telling us(we were two ladies left behind) that we were only ten steps to go. We kept on counting ten steps. And after many ten steps,we made it to the top. 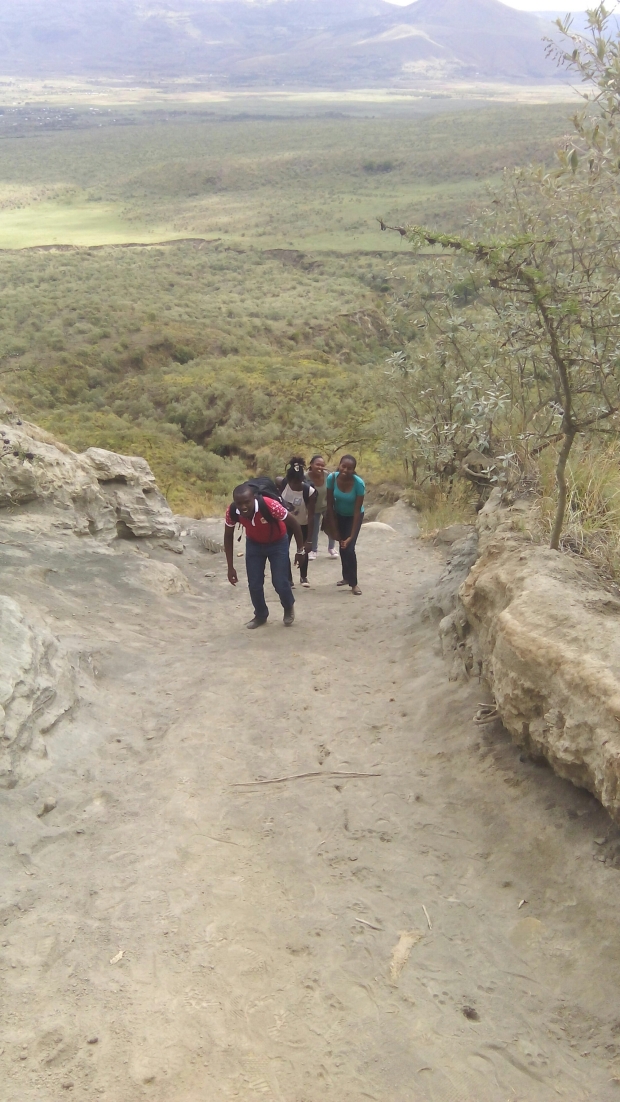 At this point I was actually surprised that I was still alive and breathing. And the views there reminded me of safaricom’s advert that had a choir singing in various parts of our beautiful country. Needless to say, it was still my favorite advert by then. I wished I had a better camera. All the same, I breathed in the beautiful air and feasted my eyes on God’s creativity. 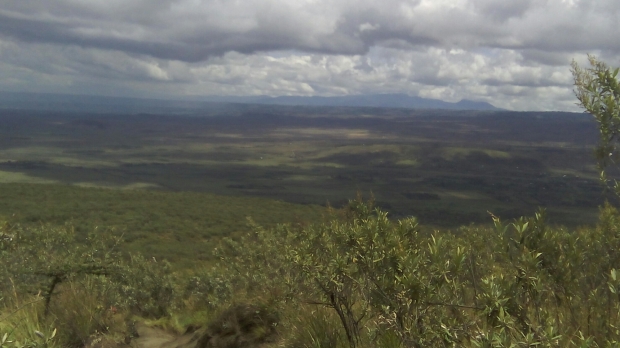 “Who wants to go round the crater?” Alex asked. Around three people besides him offered to go. The rest were like even with “kamute” they wouldn’t dare. For me to say that I wanted to go around the crater,shocked every single person there. Being the most unfit,the last to get to the top did not exactly fit into someone who would want to do a more strenuous thing. But I wanted to go around. There were three beautiful “small hills” on one side of the crater that looked enticing. I felt as though they were beckoning for me to come try them. And try them I did.
The crater was torturous to say the least. There was only one ‘gully’ that someone could use to hike it. That is ,a deep thin pathway formed in the middle of the crater that has clearly been used by many people. Besides that,there was nowhere else one could walk lest you risk falling into the crater or on the other side of the mountain. 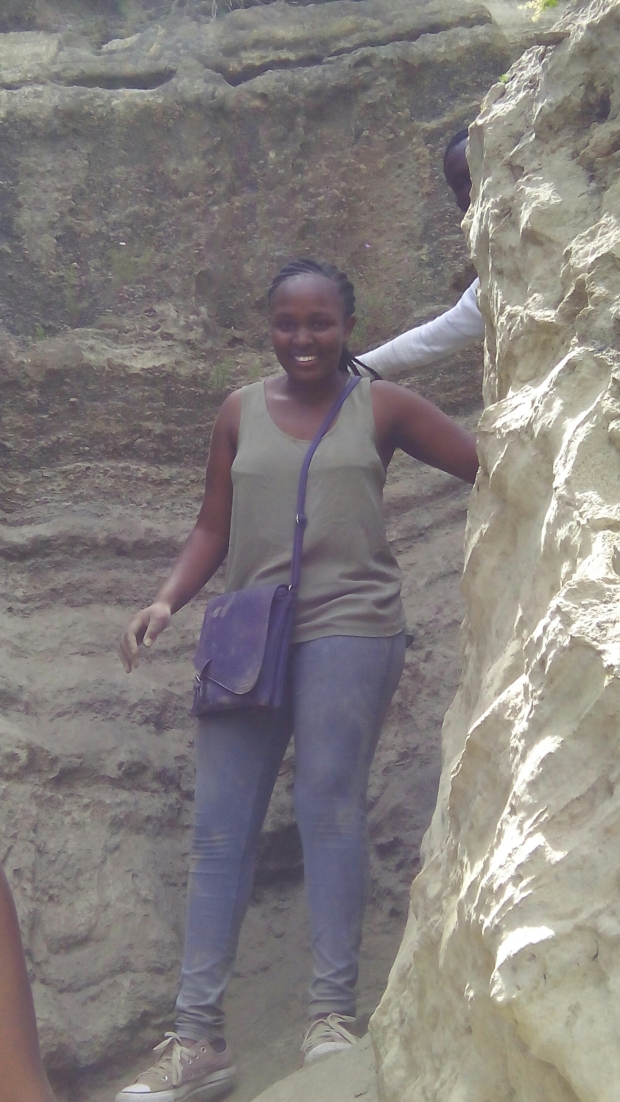 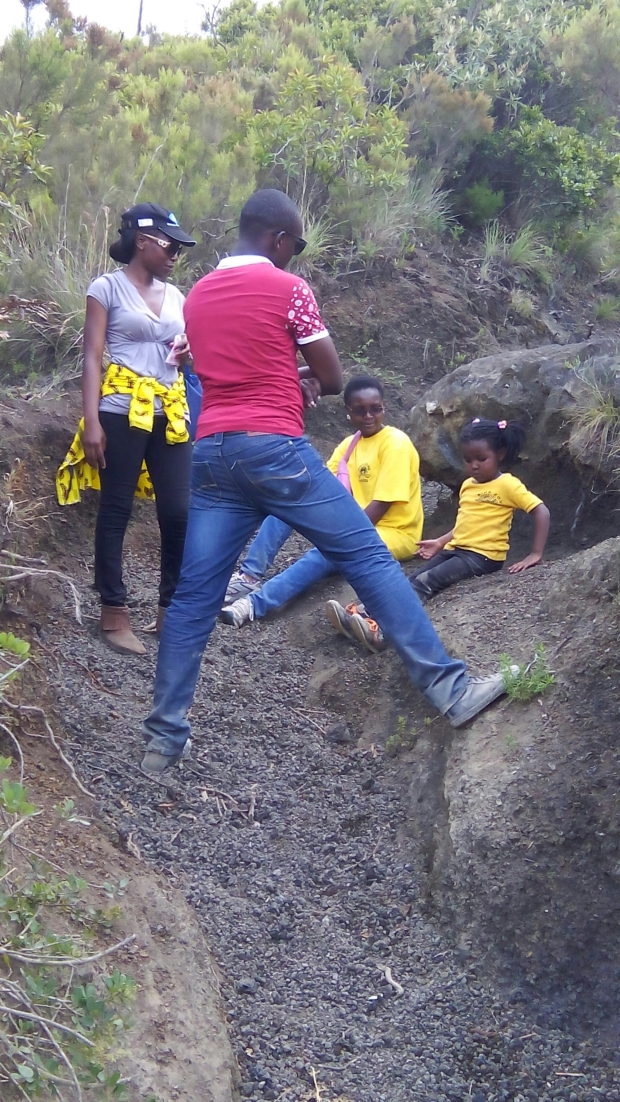 The first ‘hill’ on the crater, was tough but seeing some children as little as 5yrs going at it gave me hope. We rested after that and moved on to the second one. Climbing that one required stability. Something I didn’t have at this point. At this point I cared less on how I looked. So I held on to the walls of that pathway and moved one step at a time. I now discovered as I was climbing down the second hill that going down was harder than going up. I fell. But that didn’t stop me.
We were now on to the last hill. It was menancing even from just the way it looked at us. And to think that a while ago,I had thought it cute and beautiful,just sitting there waiting to be climbed. Looks can be deceiving. For this one I was helped immensely. Alex had his phone belting out “incredible by Celine Dion and…”. That song was music to the ears. He kept on encouraging us to keep going on. Mary, a very fit friend,seemed to be finding it all easy. Her clothes we were clean. You should have seen me at this point. Odeny,the other guy in the group held my hand at various intervals. The unfit me struggled on. 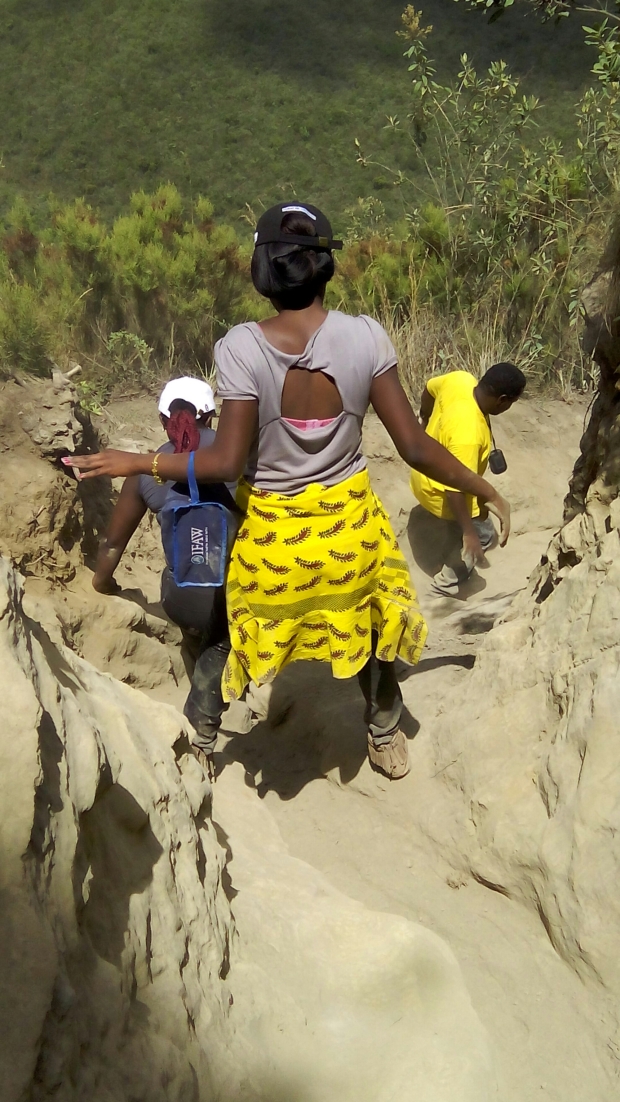 I tell you nothing in this world is sweeter than achieving something you didn’t think you could,yet you wanted to. Nothing beat the feeling of being at the highest point of Mt.Longonot. Nothing. Not even being called to the best high school in the country. Or getting a small sister. Or seeing the ocean for the first time. Or traveling to Dar es salaam by road. Nothing. And that’s how on that summit,my body aching and begging for relief, my soul filled with joy for seeing all that beauty at once with my own eyes, I fell in love with hiking. And I knew deep down that I had found something that makes me tick. I had always loved travelling and now I discovered a more specific part of traveling. Hiking. 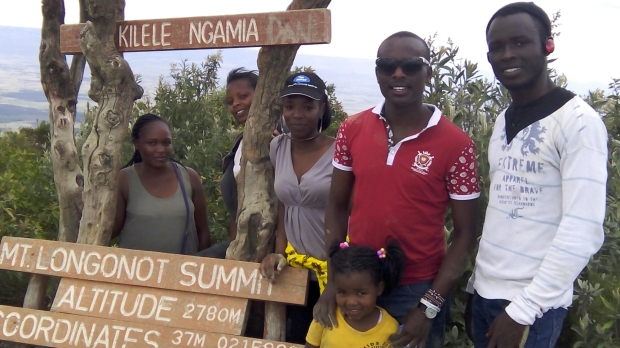 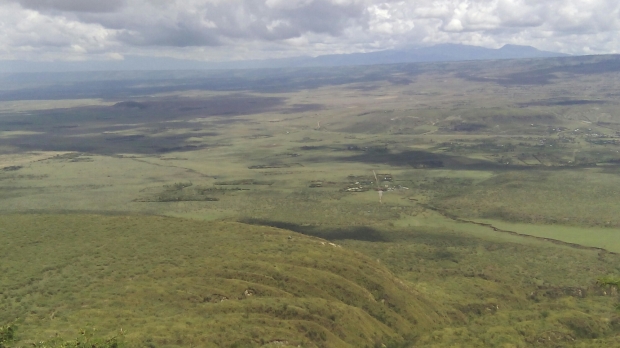 The journey down the last hill was my most memorable. I fell over five times. My friends even recorded me falling(it was that expected) my body was tired of holding me. But each time I rose and trudged on. I slugged on. The rest of the crater was quite flat. Incredible kept on playing. Alex didn’t leave me behind. We arrived at where we had started and started the journey downwards. Going down was obviously not easy,but at this point I was too worn out to even stop and rest. My body was on automatic that kept moving it one step at a time. Till we got down.
When I was young,I went to Tsavo National park over 20 times. But one time that had always stuck with me was of a time we climbed a ka-hill that was made up of changarawe or gravel. This meant that every two steps you made forward was one in actual sense. Before had always wondered why I that trip had always stuck in mind. But now I knew why. That hiking had tugged at my heart. It had called me at that young age. But I did not discover it until Mt.Longonot told it to me plainly. That our relationship looks beautiful on the outside, its beastly on the inside, but its here to stay.
The rest of our stay in Naivasha was a blur to me. We went back to school. I went back to hustling. But that experience changed my life forever. I now know one more thing about myself. And I think that makes me a better person than I was before. Its been a whole year since I hiked again(sounds weird and lazy I know, but its been a learning curve that year). And now I’m back to the game. I’m wiser now. My priorities are clearer now. Plus I have discovered a whole new world of budget travel agencies. How on earth didn’t I know of this world in first year? But everything has its season.